The massive bust comes even as the UK continues to increase penalties for hosting large gatherings. 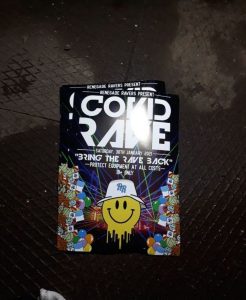 A forthcoming rave that had sold hundreds of tickets to individuals in advance has been shut down by UK police.

The event, titled, Covid Rave, was scheduled to take place last weekend in an abandoned warehouse, but it was thwarted by police ahead of time as organizers arrived to begin making preparations. Northumbria Police made several arrests on the scene. In the process, concert equipment and drugs were also seized. Subsequently, attendees who had purchased tickets were warned by police via social media to stay home.

Assistant Chief Constable, Neil Hutchison, condemned the actions and stated that the event would have been illegal even in the absence of a pandemic. “This event was widely marketed, flyers were distributed and tickets were sold to hundreds of people. It would be illegal even if we were not in the midst of the pandemic, Hutchinson stated. “But to host a rave while the entire region works hard to combat the spread of coronavirus is wholly irresponsible and incredibly dangerous.”

The bust comes even as fines for hosting large gatherings have dramatically increased in recent times. Depending upon the size of the event, fines of up to £10,000 may be assessed to organizers who host gatherings in violation of current COVID-19 related regulation.