DEADMAU5 SHARES TRACKLIST FOR UPCOMING COMPILATION “WE ARE FRIENDS VOL. 10”

The EP is set to feature music from No Mana, Grabbitz, MOGUAI, Mord Fustang, and more. NICK YOPKO FEB 1, 2021 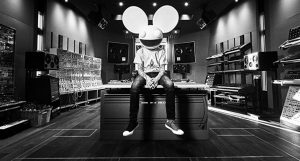 deadmau5 recently revealed who will be joining him for the tenth volume of his we are friends compilation series. After being announced last week, fans began to speculate which artists would be releasing new tunes on the mau5trap showcase. Over the weekend, across his social media pages, a video revealing the tracklist was shared.

MOGUAI, Mord Fustang, Mr. Bill, M4NDY, Notaker, No Mana, Pig&Dan, Rinzen, Tommy Trash, Wolfgang Gartner, and Zonderling. Some of these names may look familiar to fans of the masked producer, as many have been featured on previous volumes in the series or have even collaborated with the man himself. In addition to the large cast of talent, fans are particularly excited to see the official release of deadmau5’s 2019 remake of “Arguru.”

deadmau5’s we are friends vol. 10 is set to release on Friday, February 12th, 2021. You can pre-save the tenth entry in the series here.