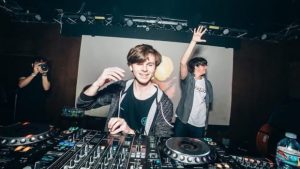 The Walking Dead star Chandler Riggs, who also DJs and produces electronic music under the moniker Eclipse, has been released from the hospital following surgery stemming from an unknown illness.

Despite the scary hospitalisation, Riggs seems to be in good spirits, sharing an update “fresh out of surgery” with fans on Twitter via a video in which he sports a walker.

watch out wall street, here i come - fresh out of surgery. if you rich bastards thought we was gonna go down without fighting over $GME you’re dead wrong, i’ve got a whole bottle of oxycodone and i’m ready to make more poor financial decisions. more today, more tomorrow. 😤🚀👐💎 pic.twitter.com/4i4B3BNDK4

Riggs portrayed Carl Grimes, one of the main protagonists on The Walking Dead, prior to his character’s death in the show’s 8th season. Additionally, he is an accomplished EDM producer, releasing music on Steve Aoki‘s famed Dim Mak Records imprint and collaborating with the likes of Pauline Herr and Xavi, among other notable artists.

He also performed a soaring set at the 2018 edition of EDC Las Vegas, one of the most coveted music festivals in the country, which you can check out below.